So after crossing the Thai/Laos border we all hopped in Laos style Tuktuks to meet our boat that would be our transport for the next couple of days cruising down the Mekong. After the pretty heavy night before there was a lot of napping on the boat I between enjoying the scenery and great food put on by the family who owned the boat. We then arrived at the village where we were staying for the night, met the local hotel dogs and settled in before going to ‘happy bar’ the one bar in town for a couple. After a huge thunderstorm in which we thought a bomb had gone off the thunder was that loud we managed to spot an elephant being taken for a stroll at the sanctuary across the river. Not your average breakfast viewing! We then hopped back on the boat for more cruising down the Mekong seeing a lot of buffalo and some caves and other stunning scenery along the way. 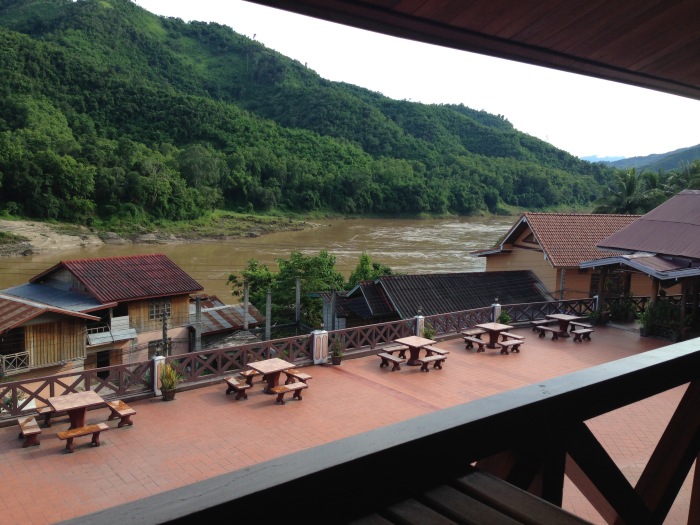 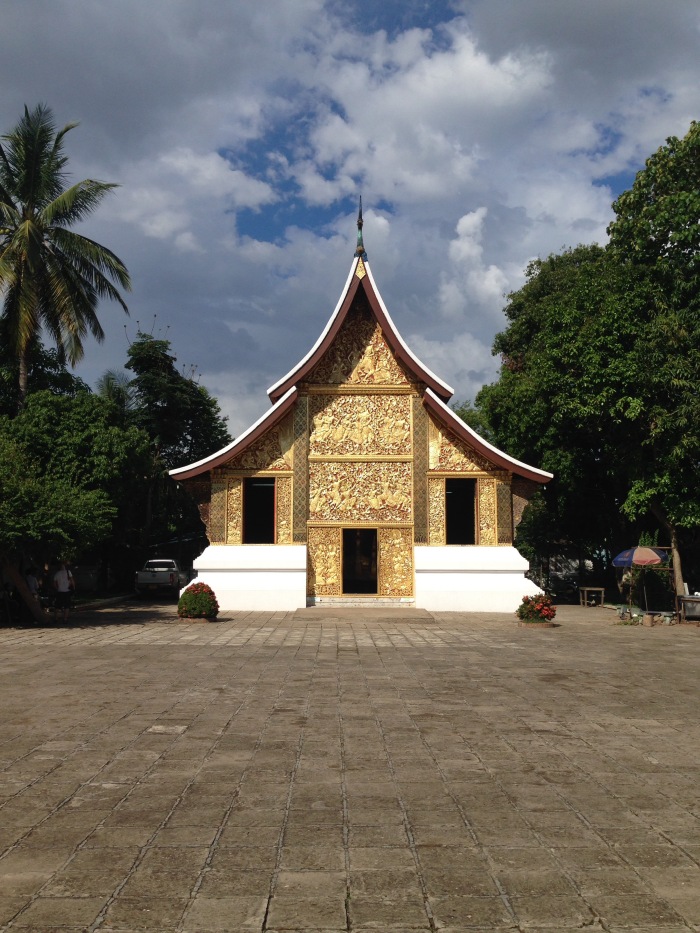 Next transportation was bike Tuktuks which took us to Luang Prabang which was to be our home for the next couple of nights. The group all had some bicycles so we went to a local temple, I had my fortune predicted and luckily it was all good and also managed to lift Buddha above my head which apparently bodes well. After a cheeky pre dinner ‘new old fashioned’ at a cocktail bar owned by a Brit and styled like one in London, we went for dinner at a local restaurant in town run by a Canadian and full of travellers overlooking the Mekong. Now in Laos the country is communist so there is a 11.30 curfew. However there is a bowling alley that for a reason I can’t remember is exempt from this. So a bunch went there and having not had nearly enough whiskey on my travels so far I journeyed back to the cocktail Bar with a few others for some scotch. 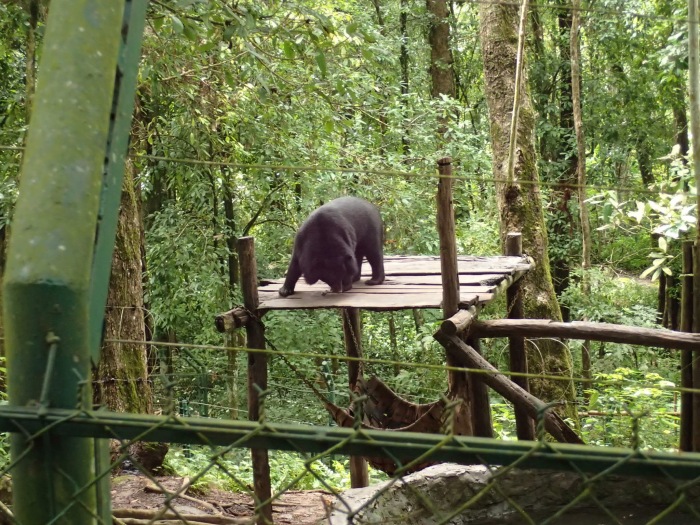 The next day was our first lie in! All mornings so far had been early started before 8am and usually waking up before 7. So getting to sleep in until midday was pretty ideal. The trip was to some local waterfalls which were absolutely beautiful and probably the best of my trip so far, especially because they were located next to a moon bear sanctuary so I got to see some bears. I did my best superman impression and luckily managed to get a photo of me in the air on third attempt and then finished the afternoon off with a very local delicacy of a Nutella crepe. 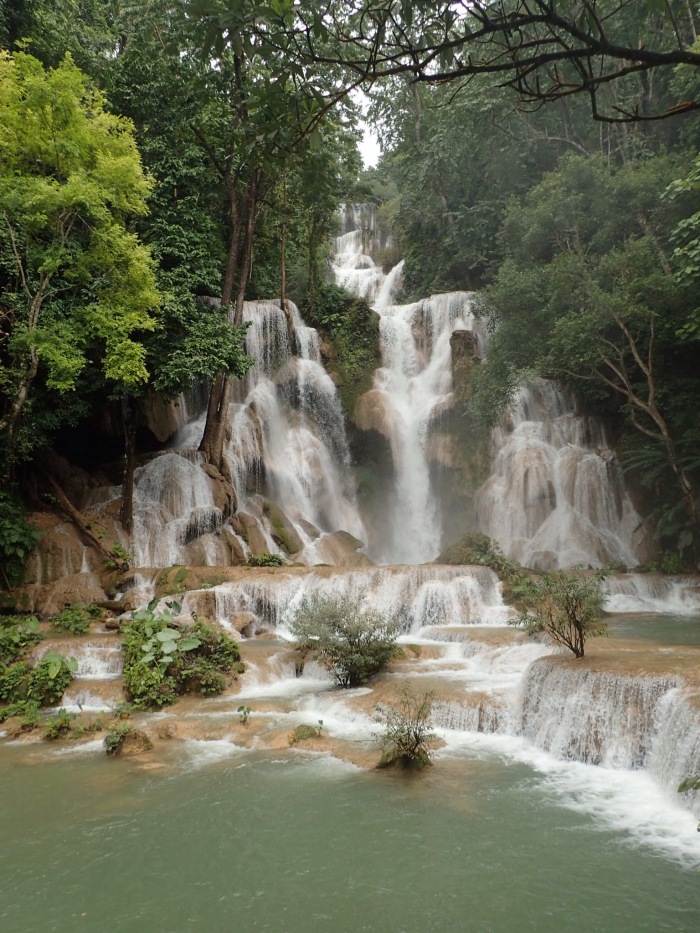 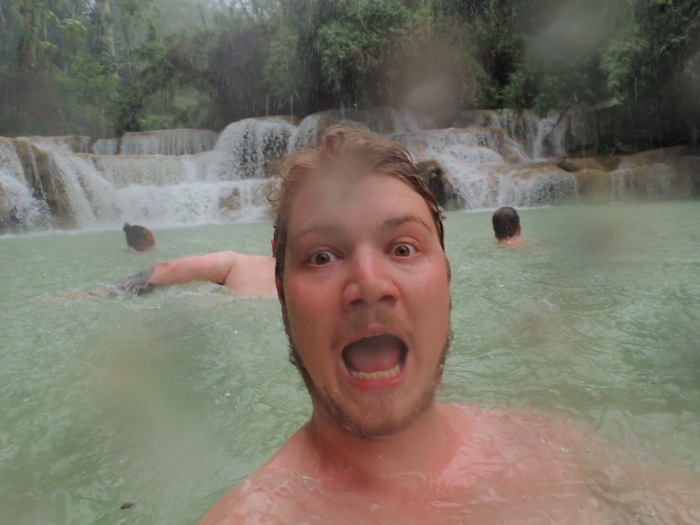 In the evening we went to explore the night market which seemed to I on for ever. There’s also a short hike up some stairs to a peak in the middle of Luang Prabang where we were staying and the views from the top were spectacular as you can see. I finished the evening off with a cheeky dip in the pool before it closed at 9.

The next morning we were up at 5am for the Alms giving ceremony, this is where people from all over donate food to the monks from various temples each morning. After being slightly nervous I wouldn’t get my rice in their bowl or do something otherwise clumsy and innapropriate it all went fairly smoothly. I also enjoyed seeing two clever local dogs walking alongside the monks for any rice that might have gone astray. 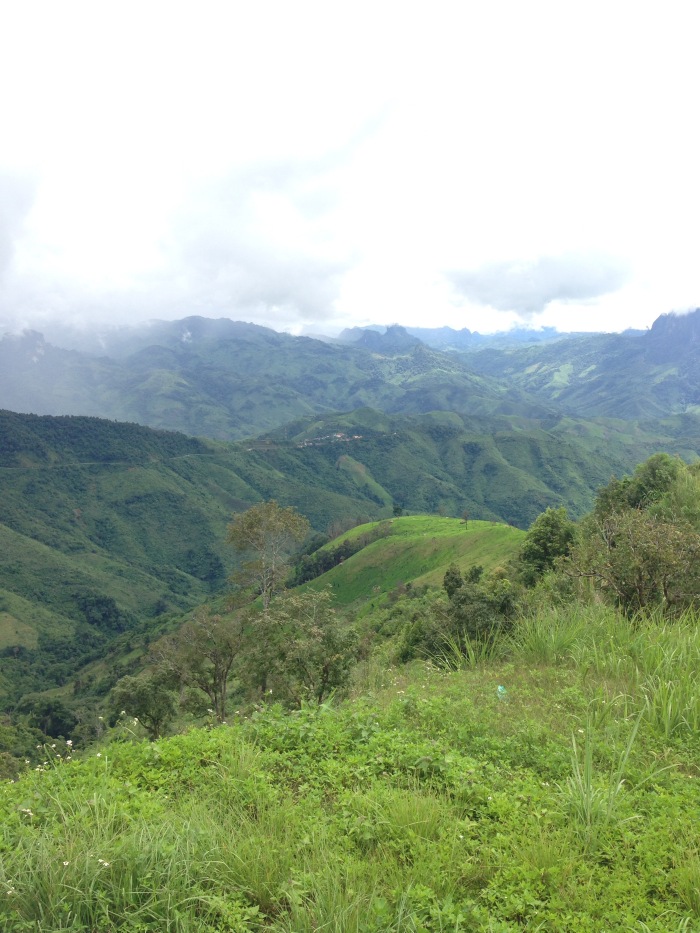 After that we hopped on a tuktuk and then coach for what was to be a lol travelling day. We drove through the mountains seeing stunning scenery along the way and stopping for lunch at a place called ‘spectacular views’, I’ll leave the pictures to unlock the mystery of why it’s called that for you. 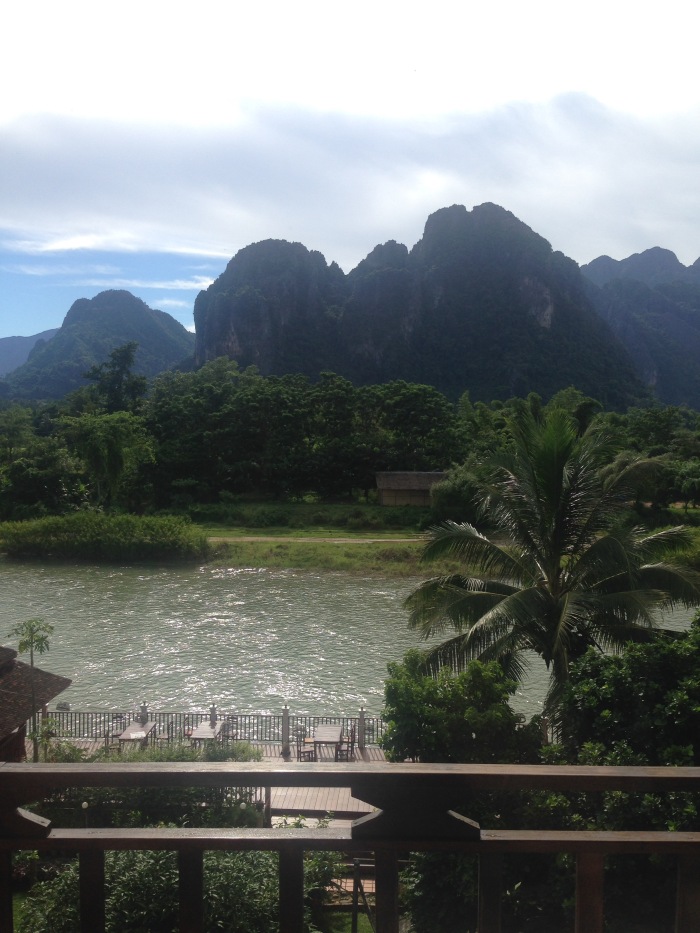 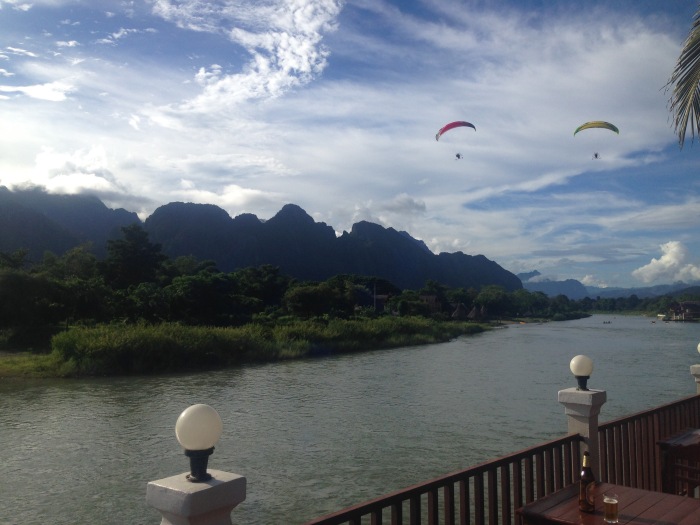 That evening we arrived in Vang Viene and the view from the hotel was absolutely incredible and a definite top three from my trip so far if not the best… The place is situated right on the river with a stunning backdrop of mountains and the sun setting right behind them. I had a beer or two and made full use of the cocktail happy hour getting a couple of cocktails in the sunshine before heading out for dinner. I was blessed in the traditional Laos Baci Ceremony and then we ate, drank and were merry in the Kangaroo Sunset bar in town. 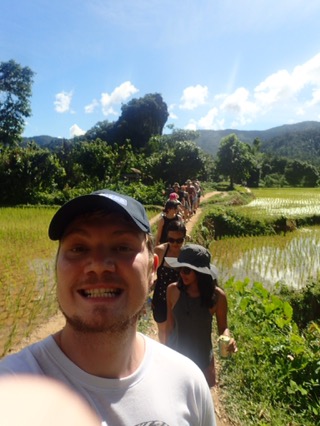 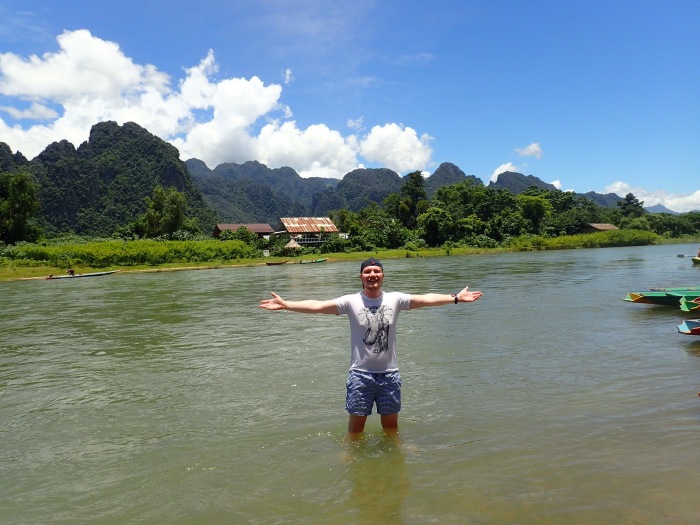 The next morning was probably one of my favourite in Laos so far, a short drive from our hotel and a short walk in the 35 degree sun… We got to tune through some caves. Now tubing is basically sitting in huge rubber rings floating about, we had head torches on so see in the dark, and navigated our way through using rope attached to the cave walls. Afterwards we went back downstream and hopped in kayaks working our way 5km downstream to the hotel. Then after a quick bite for lunch we went to Blue Lagoon, a small stream where you can relax in the water and jump of a 7 metre high tree, although slightly intimidating this was great. We finished the evening with some food in an Irish bar without any Guinness (this made me very upset obviously)… Then ended up outlasting the hotel bar staff at the riverside bar. 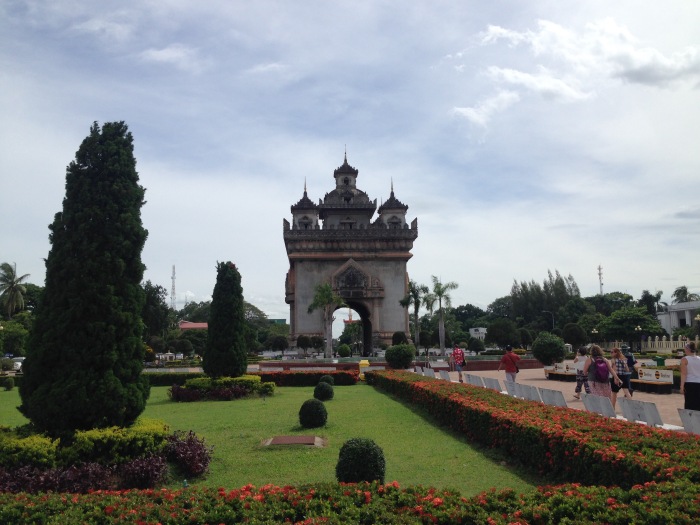 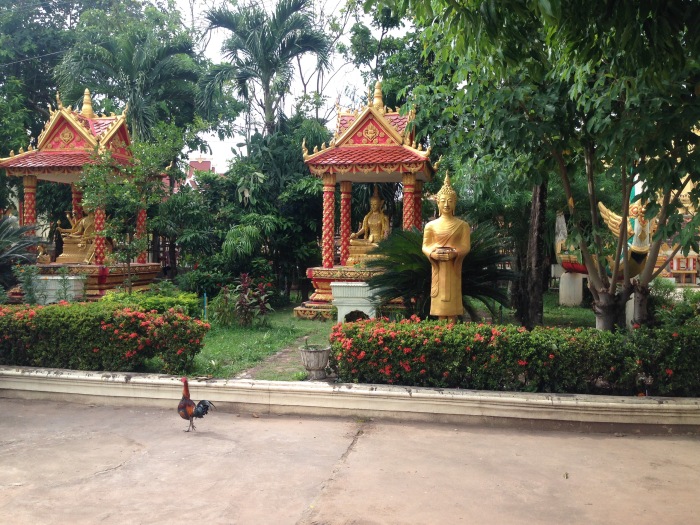 The next day we had a half day drive to the capital Vientiane where we saw some of the sights the city had to offer. We also visited the COPE foundation who help people disabled by leftover bombs from the Vietnam war which was really interesting to learn about and also good to help out. In the evening we then headed to the night market to finish the day with some great food. Overall Laos has been incredible and I definitely enjoyed it a bit more than Thailand. I think obviously we spent longer so got to see some breathtaking scenery, but also as a third world country you really got to experience completely different ways of life and even by being a tourist you’re massively helping Laos develop as a country.